Analysis: Unending reign of terror in Nigeria: Where is next?

The other day, I was travelling to Delta State, and I almost died of panic. What happened? Two men walked into the waiting area of the Itakpe train station in army camouflage and immediately what came to mind was the Abuja-Kaduna train attack. Until I got to my destination in Agbarho, my mind was never at rest.

In 2022, the reign of terror in Nigeria assumed a whole different dimension. Insecurity in Nigeria has reached an alarming proportion, manifesting in the form of banditry, kidnapping, mass shootings and political violence, forcing many in the country to now live in the throes of fear as ransoms paid since this year have already exceeded N1 billion.

The country’s North-central and Northwest regions continue to experience communal militia activities, while the southeast has witnessed multiple clashes between the separatist Indigenous Peoples of Biafra (IPOB), the Eastern Security Network (ESN) and security outfits.

However, kidnapping, mass shootings and political violence have taken a more national dimension, with Borno, Kaduna, Niger, Plateau and Zamfara states ranking among the top most violent states in the country in 2022, according to a UN Report.

“From January to May 2022, the top five most violent states in Nigeria recorded 900 kidnap victims,” the report said quoting the Nextier Violent Conflict Database.

Despite the bill banning payment of ransom which was passed by the Nigerian Senate in April, kidnapping for ransom has grown significantly, with over N1 billion paid in ransom for abducted victims this year alone.

More than N800 million, which represents the highest amount paid as ransom in a single month this year was recorded in the month of July. Six Nigerians and one Chinese national abducted in April when bandits attacked train passengers allegedly paid N800 million to regain their freedom few days ago.

Similarly, the Medical Director of Dansadau General hospital in Zamfara State, Mansur Muhammed Dansadau and two other health workers who were abducted in Dansadau emirate were allegedly released after with the sum of N5 million.

In addition, four persons kidnapped along Irele–Oke Ako road in Ikole Local Government Area of Ekiti State, reportedly regained their freedom after a sum of N1 million naira was paid as ransom.

Two other kidnap victims – the 13-year-old daughter of a Reverend in Adamawa state Daniel Umaru and a former Secretary of Birnin-Gwari Local Government council Abubakar Muhammad Aliyu -were said to have paid undisclosed sums of money to their kidnappers.

Aliyu was later killed despite the payment of ransom, while Umaru’s daughter was released after two of his sons aged 19 and 23 years were killed and buried.

Senior Special Assistant to President Muhammadu Buhari on Media and Publicity Garba Shehu, has said the payment of ransom by families of kidnapped victims is fueling terrorism in Nigeria.

Shehu also predicted that kidnapping for ransoms will continue until Nigerians stop making payments to kidnappers and allow the security agents to do their job.

“The first priority for most of them is to get their family back and they are willing to pay, and they’ve paid and these payments, whether anybody likes it or not, will continue to fuel terrorism.

We have to learn from experiences in other lands that when you pay, you are fueling terrorism, you are fueling the hijack and kidnapping of fellow citizens and it will go on and on until simply people call off the bluff and be prepared to allow law enforcement,” he said. 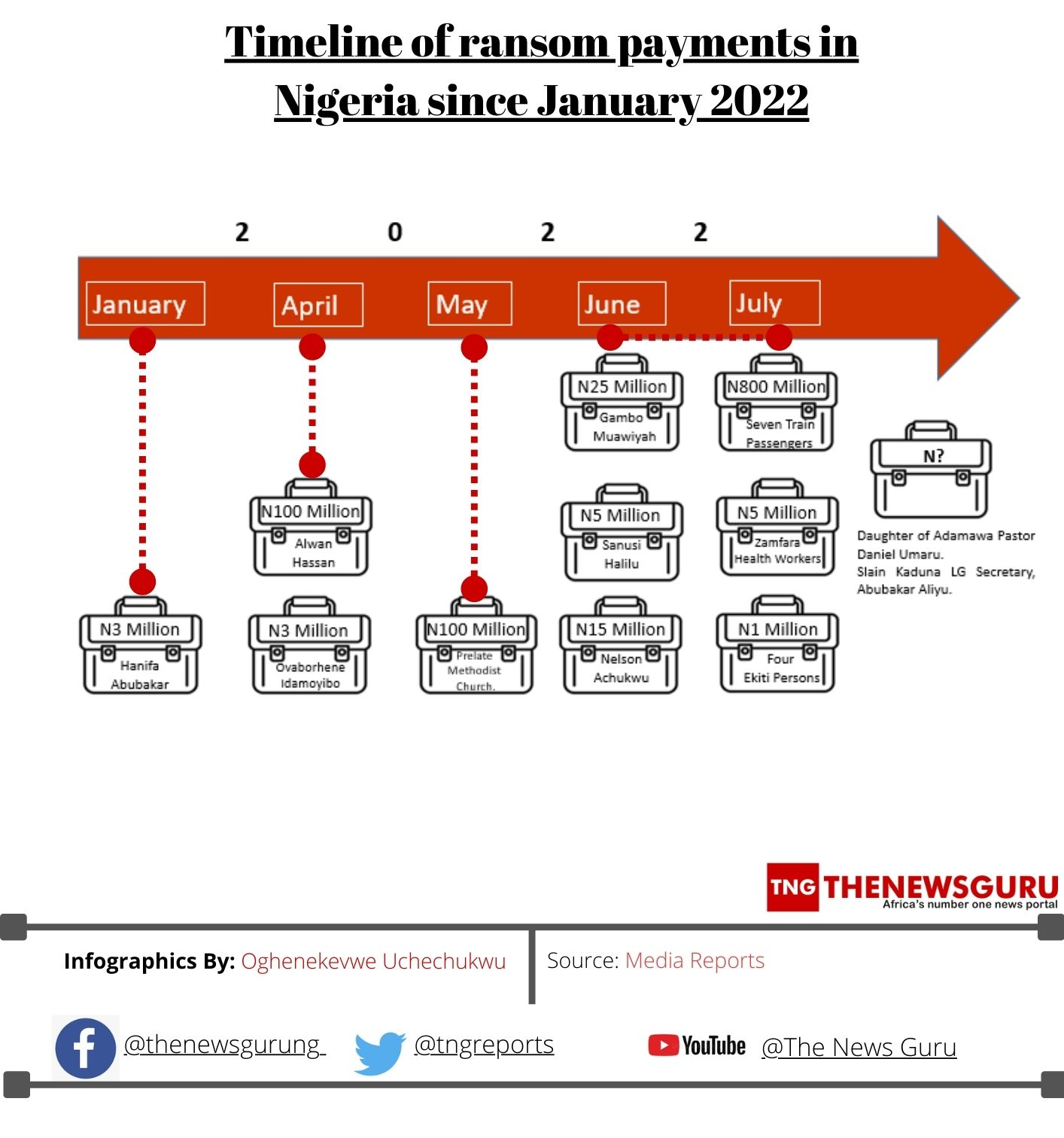 Often times, however, family members of kidnapped victims have said they do not trust security agents to help them secure their relatives. In many cases too, abductees whose family are unable to raise the requested ransoms remain in captivity for months and even years or are brutally killed.

Some Nigerians who spoke to TheNewsGuru.com (TNG) say the recent spate of violence in the country cause them to live in constant fear, as road travels have become increasingly unsafe and places of worship once held sacred and now desecrated by brazen gun-wielding men.

“Security has really deteriorated in the country and nowhere is safe now. You can’t go to your farm, travel or even worship in church, without having fear that something might happen at any moment,” a woman in Ogun state who does not want to be named told our reporter.

Another person who recently travelled by train from Itakpe to Agbarho said he was stricken with fear throughout the duration of the journey after sighting two men dressed in army camouflage uniforms around the waiting area of the train station.

“The other day, I was travelling to Delta State, and I almost died of panic. What happened? Two men walked into the waiting area of the Itakpe train station in army camouflage and immediately what came to mind was the Abuja-Kaduna train attack. Until I got to my destination in Agbarho, my mind was never at rest,” he said.

A retired Major General of the Nigerian Army Ibm Haruna, in a recent interview on AriseTV noted that insecurity in human endeavor was a lifelong challenge.

He, however, noted that the federal government must re-emphasis its appraisal of the architecture, organization, functionality and capacities of military agencies to perform, in the light of current security threats.

“They must train, they must be equipped and they must be relevant to the respond to situations,” Haruna said.

Similarly, the UN report noted that Nigeria’s security architecture was not designed for unconventional wars and there is need for a special force that will fill the gaps.

“With evidence-based research, reliable data and intelligence, the Nigerian government can understand the push factors, enablers and ripple effects of violence in many troubled regions.

“Beyond these, proactive measures should be deployed to build peace and promote human capital development in states near the theatres of violence to prevent the spread of terror,” the report said.

The report further advised that there is need to include efforts to tackle the proliferation of small arms and light weapons (SALWs) and regulate border entry points, in order to manage gunmen violence in the country.