Over nine million pupils in 54,619 public primary schools are said to be benefiting from the programme which caters to only junior classes 1-3. Another 107,550 cooks are said to be engaged for the purpose of implementing the programme and the agriculture sector has been strengthened, as meal ingredients are locally sourced.

The main objectives of the school feeding programme when it was introduced, were to provide a safety net for the poor, increase enrollment, and eradicate malnutrition in school-age children while also stimulating the national agricultural economy, but it has failed to provide relevant data that shows increased enrolment of pupils in public primary schools over the last six years.

Controversies around the school feeding programme

Despite the achievements the programme claims to have recorded since its inception, a lot of controversies, which bother on implementation and accountability, have come from different quarters.

For example, the school feeding programme is designed to ensure that each child beneficiary gets one solid quality meal a day for a minimum of 20 days in a month, in order to increase enrollment, reduce the dropout rate and improve learning outcomes.

However, the cost of the meal per child pegged at N70 drew criticism from many Nigerians, and frustration from the cooks engaged to deliver the programme. It was only in February this year that the cost was raised to N100 per child.

An investigation by TheNewsGuru.com (TNG) has revealed that even with the increase from N70 to N100, the amount budgeted per child is still grossly insufficient to deliver quality meals essential to curbing malnutrition among children in a country where a sachet of portable drinking water is sold for N20, a piece of egg N80, one cup of beans or rice costs an average of N100 and 12.5kg of cooking gas is sold at N10,000 currently.

Another area of contention is the amount expended on the programme which is shrouded in secrecy, and payment delays which result in inconsistency of food deliveries. In 2020, the House of Representatives queried spending on the programme, insisting that many schools and communities were yet to benefit from the initiative. 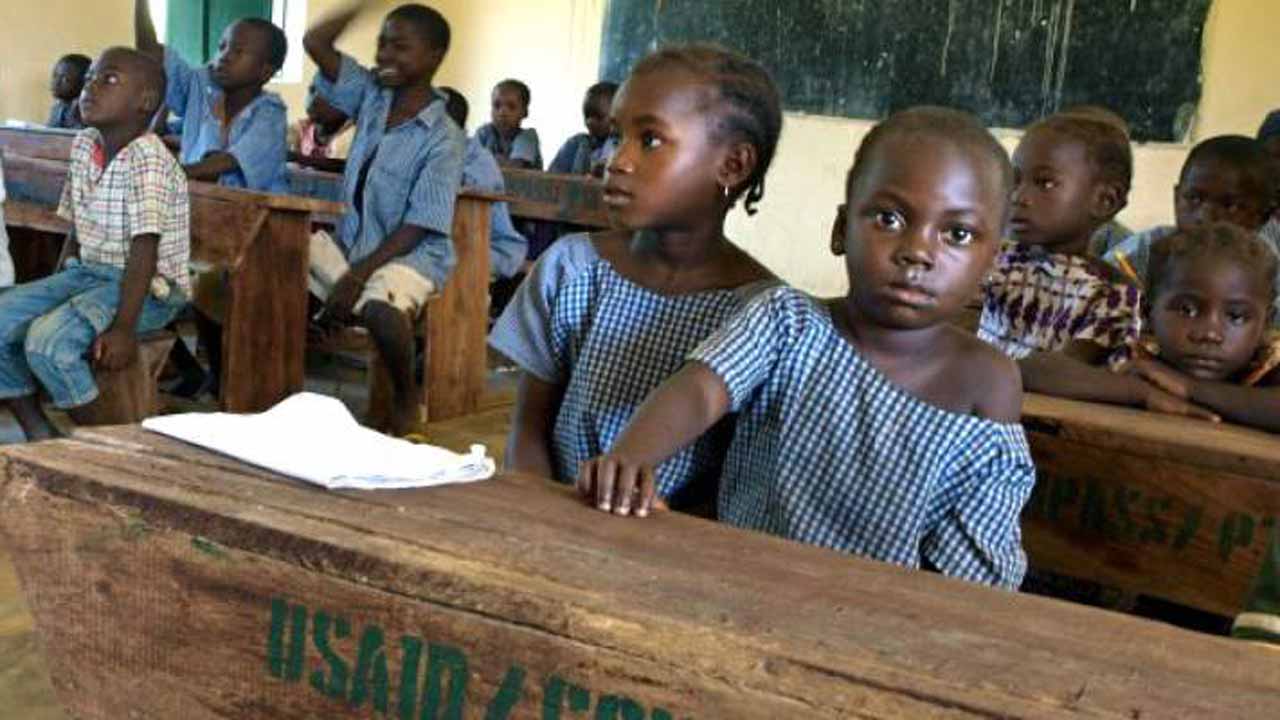 One in every five of the world’s out-of-school children is in Nigeria.

The lawmakers also noted that the data used for the programme since its inception had been unverifiable and directed the Statistician-General of the Federation and the National Bureau of Statistics, to provide data on all public schools and pupils benefiting from the initiative.

They also demanded the details of the food vendors involved in the programme, parameters for the qualifications of the vendors, for the purpose of accountability and in line with the Public Procurement Act.

While the outcome of this investigation is yet to be made public two years after it was launched, it is clear that at the new rate of N100 per person for the current 9,990,862 benefiting children, the federal government will be spending nearly N1 billion daily and N240 billion annually on the school feeding programme.

Besides the HGSFP, the federal government introduced the Universal Basic Education (UBE) Programme in 2004, as a special intervention vehicle aimed at reducing the rate of school dropouts and out-of-school children.

The UBE also seeks to improve the quality and efficiency of basic education, as well as promote the acquisition of literacy, numeracy, life skills and values for lifelong education and useful living.

However, despite the ambitious objectives of the UBE, it receives only a paltry N55.5 billion from the federal government, when compared to the school feeding programme, and over half of this fund remain unutilised.

Many states have failed to meet the criteria for accessing an annual intervention funding of up to N1.5 billion, and in some cases, there are allegations of misappropriation of these funds, while most public primary schools do not have sufficient classrooms or basic teaching aids, and remain in deplorable conditions.

Experts say that the right environment must exist for learning to take place. But the objective reality in most state-owned schools does not promote this necessity; a reason UNESCO classified Nigeria among countries where “teaching takes place, but without learning”.

Some of the criteria for accessing the fund include providing a fifty per cent counterpart funding by the state to match FG’s own contribution, the presentation of an Action Plan detailing proposed projects of how to spend the funds for education for every fiscal year and the attainment of at least 70 per cent budget execution before the release of another fiscal year’s fund.

Our findings show that as of February 2022, N33.6 billion earmarked for basic education by the Universal Basic Education Commission (UBEC) had not been accessed by 26 states and the Federal Capital Territory.

The Federal government has rolled out yet another initiative called the Accelerated Basic Education Programme, (ABEP) under the auspices of the Nigerian Educational Research and Development Council (NERDC).

The objective of the ABEP, which will receive funding support from the European Union (EU) and Plan International Nigeria is also to ensure that out-of-school children return to school.

Despite these interventions, there are currently, 18.5 million children, compared to the 8.7 million in 2014, who are out of school, according to the United Nations Educational, Scientific and Cultural Organisation (UNESCO), the highest in the world.

TNG’s investigation also reveals that these interrelated intervention programmes initiated by the federal government to reduce the number of out-of-school children have failed to provide comprehensive data that shows the growing net enrollment rate of primary school children in public schools to justify the resources invested in them.

A visit to the website of the HGSFP, showed information on the number of schools covered, students fed and cooks engaged, but omitted information on enrollments, which is a main objective of the programme.

By announcing a higher number of beneficiaries of the programme, without providing vital information on improvement in enrollment and learning outcomes as part of its Key Performance Indicators, the Programme has shown it does not consider the latter a priority.

It has also failed to show transparency in its operations or render accountability through annual reports on its activities for the past six years and the news section of the website was last updated in October 2017.

Vice President (South West) of the Senior Staff Association of Nigerian Universities (SSANU) Salaam Abdusobor, has described the school feeding programme as part of an entrenched system of corruption in the country.

“Similar projects have been embarked upon in the past with no accountability and with no evidence that it got to the beneficiaries. Where are the 10 million beneficiaries?

“While there is no doubt that some children may need feeding, which environment are these children schooling in? Is it unsafe, ramshackle and with run down environments?

“I think the Federal Government has not had its thoughts clearly planned or mapped out and this is a sustained conduit for corruption,” he concluded.

By Oghenekevwe Uchechukwu
4 Mins read
A warning strike commenced by the Academic Staff Union of Universities (ASUU) on February 14, which was supposed to last about four…
TNG investigationsTrending

By Oghenekevwe Uchechukwu
4 Mins read
The Nigeria Governors’ Forum (NGF) on Monday denied claims that it reached an agreement with the federal government, over the controversial $418…
EconomyTNG investigations

INVESTIGATION: Nigerians could pay over N450 per litre of petrol from July 2023

By Oghenekevwe Uchechukwu
5 Mins read
Nigeria’s President Muhammadu Buhari will present the 2023 appropriation bill before the National Assembly in September, and the country’s projection to spend…