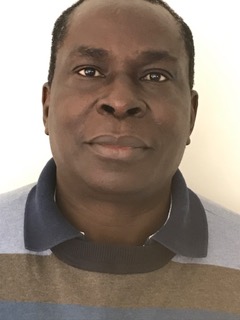 Mideno Bayagbon is the Publisher of TheNewsGuru.com/TNGinvestigations.org, one of Africa’s top range online newspapers. A former Group Editor of Vanguard Newspapers, he is a celebrated syndicated columnist. A talented, investigative journalist, he is one of the leading lights of journalism practice in Nigeria.

Mideno Bayagbon currently writes the very incisive and popular column: An Eye On Politics which weekly, authoritatively postulates on Politics in Nigeria, Africa and indeed the world. In it he speaks truth to power, fearlessly.

Mideno Bayagbon became editor of Vanguard newspapers in December, 2008, after a near 11 years stint as Group Deputy Editor.

A year before his elevation to the editorship, he was appointed the Chief Marketing Officer of Vanguard Media because of his recognised high business acumen. He combined this position with his duties as Group Deputy Editor. He discharged both duties so creditably that he was serially commended by the Chairman and management of Vanguard media limited.

Within the same period, the School of Media and Communication of the Pan Atlantic University, appointed him an adjunct lecturer and he was saddled with teaching five modules. He taught in the school for eight years before moving on to other assignments.

Before this, in April 2007, he was among the students who graduated from the Lagos Business School, of the Pan African University as then was, in the Chief Executive Programme.

He was at various times Senior Assistant Editor, Features Editor, Deputy Features Editor of Vanguard Media Limited which he first joined as an intern in 1985 at the end of which he was given automatic employment pending when he would conclude his education. He was at different times, news, investigative, finance, energy, literary, entertainment and features reporter.

Educated at the University of Nigeria, Nsukka, BA; University of Lagos, MSc; and the Lagos Business School of the Pan African University (as then was), (Chief Executive Programme) he has attended several leadership programmes, including a stint at Oxford University, United Kingdom.

A Fellow of the Africa Leadership Forum, he has co-authored a number of books.

A born again Christian, he is a great motivator, speaker and erudite marketer. He is one of the breed of journalists who believe that modern journalism should be seen as a business and journalists must develop their business potentials and use their God given innate business sense and the opportunities the profession offers in confronting the technological and economic threats to the mass media and their countries.

He founded TheNewsGuru.com online newspaper in late 2016 and TNG Centre for Investigative Journalism in November, 2019.