More doctors are likely to leave Nigeria as Coronavirus (COVID-19) gets worse in the United States of America. This would be in addition to an estimated 9million Nigerians who left the country between 2014 and 2018.

As the COVID-19 pandemic takes its toll across the globe, health officials in the US had warned that the country’s coronavirus death toll could rise above 100,000 people. As a result of this development, instead of shutting its door against migrants as it did previously, America is luring foreign medical professionals seeking to work in their country.

Following reports in March that US was inviting medical professionals from other parts of the world, including Nigeria, to help in the fight against COVID-19 pandemic, which has claimed thousands of lives in that country, the president of the Nigerian Medical Association (NMA), Dr Francis Faduyile, said people had the right to work anywhere they chose. He, however, called on the government to strengthen the country’s health system to encourage more medical practitioners to stay behind.

This is even as inquiries at the US Embassy showed that only doctors and nurses who are already processing exchange and visitor programmes in the US are encouraged to seek the visa approval now. But potentially, this could impact negatively on the Nigerian health sector, as in the last five years, many doctors, among millions of other Nigerians, have left the country for greener pastures.

Already, the US health system relies heavily on immigrants, who make up 17 per cent of all health care workers and more than one in four doctors, according to a report.

Dr Joe Uba, a medical doctor with the Abia State Government, said he was looking forward to relocating from the country like many of his colleagues.

He identified Saudi Arabia and the United Kingdom (UK) as the preferred destinations for his colleagues.

However, with the growing interest of the US on foreign medical professionals, priorities will begin to change for Nigerian doctors, who are yearning to leave for greener pastures.

“I think every doctor would like to leave if given the opportunity. It is the cost of moving that is the problem. You could spend not less than N2.5 million to process it. But they pay very well, especially in Saudi Arabia,” Dr Uba said.

Also, Joseph Simon (not real name), an Abuja-based lawyer, has just returned from the UK, where he registered for an LL.M programme. He hopes to stay back there after studies.

“My short visit to London was to understand the procedure to relocate. I can only return to Nigeria if things improve. The best way is through the master’s programme,” he said, citing UK’s new policy which allows postgraduates to stay up to two years after graduation in search of jobs.

Murtala Mohammed International Airport in Lagos, Nigeria, uses thermal imaging to screen passengers for coronavirus on on January 27, 2019. It’s not clear whether such screening methods will be able to stop the spread of coronavirus in the United States, but experts say it may slow down the virus a bit. Photo: AFP via Getty Images

According to the Nigerian Immigration Service (NIS), about 4,364,668 Nigerians were issued with new passports between 2014 and 2018. But besides being a national identification and travel data, this indicates travel source states or regular departure points of most Nigerians.

The Canadian government estimates that Nigeria ranks third in the countries that have received the highest number of Canadian Express Entry in 2018 under the ITA scheme, which is usually offered to software engineers and developers, behind China and India in second and first respectively. While 6,025 Nigerians received the offer, 6,248 Chinese and 41,675 India received it the same year respectively.

With the US visa ban on Nigeria in place, more Nigerians are expected to head north in the coming years. However, with the recent US demand for foreign medical professionals, Nigerian doctors and nurses may likely use the window of opportunity. Canada is projected to welcome 700,000 immigrants as permanent residents before the end of this year, which makes it an attractive destination for Nigerians of all categories.

The National Diaspora Commission estimates that between 5 million and 15 million Nigerians now live abroad. And some of the best brains go to these countries. 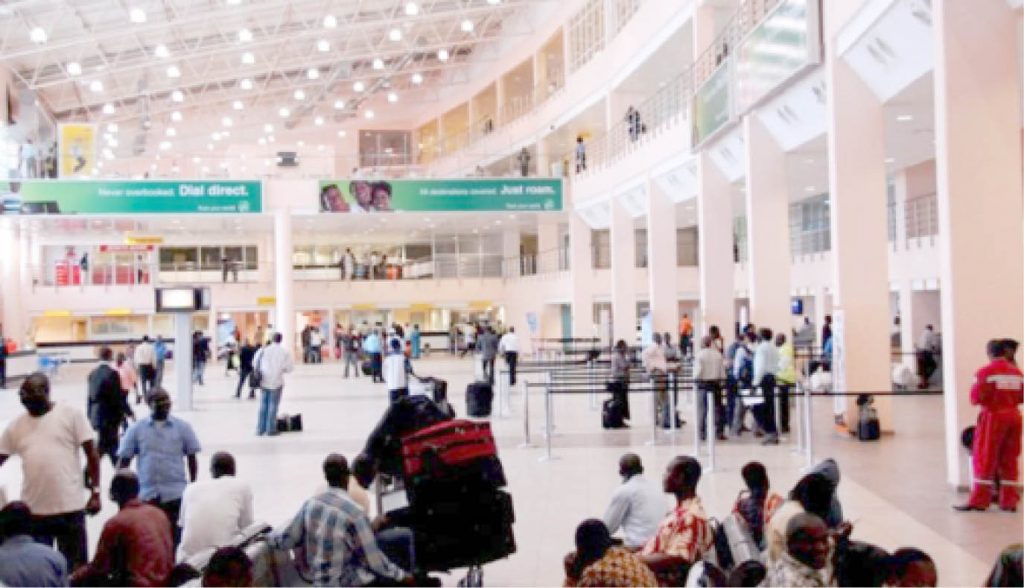 Although there are concerns of loss of skilled workers in critical sectors of Nigeria’s economy, the NBS figures showed that as Nigerians left the country in droves within the last five years, remittances from the Diaspora has risen steadily to $25.08bn in 2019, up from $3bn in 2013.

The serious economic hardship in the country has been pointed out as the major reason for the departures. Specifically, migrations are spiked by the high unemployment rate, which the NBS put at 23.13 per cent in quarter three of 2018, with a steady increase from 12.5 per cent in 2014.

Similarly, the World Data Lab, in its latest update, found that of the 201,623,008 total population of Nigeria, 95,903,776 people, representing 48 per cent of the population live in extreme poverty, which is defined to mean that they earn less than $2 a day.

Chilaka Anthony, a travel agent and frequent traveller, identified the economic situation in the country as the major reason more Nigerians are leaving the country. He disclosed that the situation is so critical that parents who fund their children’s studies overseas in international universities encourage them to find a way to stay back in those countries.

“The economic situation in the country has deteriorated, to the extent that we don’t know what to say. Many that pretend to be travelling for studies are actually intending to leave the country for good,” he said.

Also, Hillary Anosike, who has a business centre at the Chinese Visa Centre, said a lot of Nigerians travelled to China to buy cheaper goods and return to sell because of the high manufacturing rate in that country. He believes that the goods from China, which are cheap and competitive, are helping to sustain livelihoods for Nigerians who run small shops.

Writing on how climate change has affected migration, Ochiaka Ugwu, a journalist, stated that many people who engaged in agriculture in Nigeria had been forced to leave due to desertification, receding rivers, streams and lakes.

“Look at the herders-farmers clashes. Because streams and grasses are drying and pastures are disappearing, they are moving to locations where lands are greener, and in the process, they clash with farmers,” he stated.

But as more Nigerians leave the country, other nationals find it attractive. Nigeria is becoming a major economic host country for some intraregional migrants within the Economic Community of West African States (ECOWAS) with low skills. This has been projected to increase, given the recent Federal Government’s new visa-on-arrival policy, which was recently suspended as a result of the ravaging COVID-19 pandemic.

At the launch of the Nigeria Health Workforce Country Profile, 2018 and handover of the Nigeria Health Workforce Registry by the Ministry of Health, in collaboration with the World Health Organisation (WHO) and other partners, Human Resources for Health, Ministry of Health, Shakuri Kadiri, said Nigeria had only one doctor to 2,753 patients. He put the number of medical doctors registered with the Medical and Dental Council of Nigeria at 74,543; implying that there are 36.3 medical doctors per 100,000 population.

Of these registered medical practitioners in Nigeria, many have left the country due to the unconducive environment for practice. And the situation is expected to worsen with the recent US enticement.

A 2019 survey showed that about 2,000 Nigerian doctors leave annually. This has caused substandard medical care for Nigerian patients. The growing medical tourism by Nigerians, with a huge impact on foreign exchange, has been directly attributed to this.

The spokesman of the NIS, James Sunday, a Deputy Comptroller of Immigration, said travellers provided different reasons for their trips, but in some cases, as humans, what they gave as reasons may not actually be the reason for the travel.

He added that the responsibility of the NIS is just to capture individuals’ data and cross-check if there are criminal objections to their trips. He explained that once such criteria are met, they are allowed to go, as it would be against their fundamental rights to do otherwise.

“If you fall within the eligibility category for immigration, we allow you to travel,” he said.

The International Organisation for Migration (IOM) rates Nigeria as one of the largest origins of international migrants.

“Nigeria has continued to experience high internal and external migration due to its population, economic climate and porous borders,” IOM stated on its website.

Also, the director, Centre for China Studies, Charles Onunaiju, said necessary incentives and creating the enabling environment for creativity, research and professionalism in Nigeria would encourage more professionals and other citizens to stay back and even attract the best brains outside the country.

“It is important for the government to entrench a system where merit, rather than where a person comes from, determines their position,” Onunaiju said.

This report was supported by Code for Africa, via its Academy Hacks/Hackers Community Initiative

By Oghenekevwe Uchechukwu
7 Mins read
Paternity fraud, a situation where a man is incorrectly identified as the biological father of a child, has become more rampant in Nigeria and often occurs between unmarried couples where a father seeks to avoid financial liability for a child he does not believe to be his. TheNewsGuru.com (TNG) investigation shows that in recent times, paternity disputes are not uncommon among married couples too and the popular assumption is that women have become more promiscuous, maintaining multiple sexual partners, even within the confines of marriage.
HealthTop Story

FACT CHECK: Did power outage result in death of 14 babies at UPTH?

By Oghenekevwe Uchechukwu
2 Mins read
Over the weekend, social media was awash with a report that fourteen (14) babies in the neonatal unit of the University of Port Harcourt Teaching Hospital (UPTH), Rivers State died as a result of an epileptic power supply. Findings by TheNewsGuru.com (TNG) revealed that the report titled: “Doctors suspend surgery procedures as 14 babies die at UPTH’s incubator due to power outages” was first published by an online news platform called Standard Observers on July 1.
Health

By Ediri Oyibo
17 Mins read
…it’s the fault of the govt., we have not done well, says Bayelsa’s former Commissioner for Health …HMB should just shut down…